Biden: Next Week He’ll Give Transgenders ‘Access to Sports…and Locker Rooms in Accordance With Their Gender Identity’ 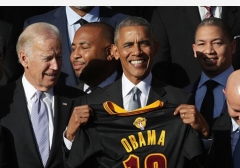 (CNSNews.com) – President-elect Joe Biden is promising that on “his first day in office” he will issue an order requiring all schools that receive federal funding to let transgenders play on the sports teams and use the bathrooms and locker rooms that accord with their “gender identity.”

On his campaign website Biden promised to: “Ensure young LGBTQ+ people are supported and protected in our schools and college campuses by: Guaranteeing transgender students have access to facilities based on their gender identity.”

“On his first day in office,” says Biden’s website, “Biden will reinstate the Obama-Biden guidance revoked by the Trump-Pence Administration, which will restore transgender students’ access to sports, bathrooms, and locker rooms in accordance with their gender identity. He will direct his Department of Education to vigorously enforce and investigate violations of transgender students’ civil rights.”

This is a screen capture of the passage from Joe Biden’s campaign website that describes has plan to order schools to give transgenders access to the sports teams, locker rooms and restrooms that accord with their “gender identity.”

Biden’s campaign website links to the “Obama-Biden guidance” this passage references. It was issued by the Obama Justice Department and Department of Education on May 13, 2016.

“Gender identity refers to an individual’s internal sense of gender,” says this Obama-Biden order. “A person’s gender identity may be different from or the same as the person’s sex assigned at birth.”

“The Departments [of Justice and Education] treat a student’s gender identity as the student’s sex for purposes of Title IX and its implementing regulations. This means that a school must not treat a transgender student differently from the way it treats other students of the same gender identity.”

The Obama-Biden order goes on the specifically state that schools must give transgender students access to the sports teams and restrooms and locker rooms that accord with their “gender identity” not their actual biological sex.

“Title IX regulations permit a school to operate or sponsor sex-segregated athletics teams when selection for such teams is based upon competitive skill or when the activity involved is a contact sport,” says the order. “A school may not, however, adopt or adhere to requirements that rely on overly broad generalizations or stereotypes about the differences between transgender students and other students of the same sex (i.e., the same gender identity) or others’ discomfort with transgender students.”

The order notes that transgender students do not need to undergo any sort of medical “treatment” before schools must treat them according to their gender identity.

It cites a court case that said: “An agency may not condition access to facilities—or to other terms, conditions, or privileges of employment—on the completion of certain medical steps that the agency itself has unilaterally determined will somehow prove the bona fides of the individual’s gender identity.”

“Under Title IX,” the Obama-Biden order says, “there is no medical diagnosis or treatment requirement that students must meet as a prerequisite to being treated consistent with their gender identity.”