Alarmed by the prospect of a third wave of Corona infection, the Norwegian government has proposed imposing curfews for the first time. The proposal calls for ordering Norwegians to mostly remain indoors for as long as 21 days, but Justice Minister Monica Mæland hopes it won’t be necessary. 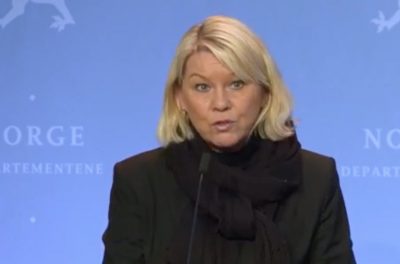 The proposal from the health ministry comes after a recent sharp rise in the numbers of people testing positive for the Corona virus, and major outbreaks in areas where infection had been low, such as Trondheim and Rogaland. Health care officials are especially worried about new strains of the virus that are highly contagious. Government officials are thus seeking a new law change that would enable them to enforce even stricter infection control measures.

The proposed curfews would likely only be imposed in certain areas of the country and only for parts of the day. Mæland said the government may need the power to keep people away from areas where the public can meet, but only within a strict framework to prevent the spread of Covid-19. The government is asking that a proposed 21-day curfew (called portforbud in Norwegian) could also be extended 14 days if necessary.

‘Really hope’ it won’t be necessary
“So far we have been able to avoid the most dramatic (anti-infection) measures in Norway, like fully shutting down businesses and curfews,” Mæland stated in a press release late Friday afternoon. “Many other European countries have imposed such measures. I really hope we won’t have to, but if it becomes necessary, it’s important that we have the means to do it.”

The proposed curfew “would not ban a minimum of human contact,” according to the press release. Critical public functions would also be maintained and both children and other “vulnerable groups” would receive special consideration if a curfew is imposed.

Mæland stressed that imposing a curfew “is very invasive” and would “only be used in an extreme situation where other measures aren’t adequate. We’re not there today.” The deadline for public response to the proposal is January 31.

Progress MP Per-Willy Amundsen, a former justice minister himself, sent a message to Norwegian Broadcasting (NRK) late Friday that the party opposes the government’s proposal. “A curfew is an extremely invasive measure that challenges the constitution and citizens’ fundamental human rights,” Amundsen wrote in the email to NRK. “The government should rather put a priority on much better control of the country’s borders.”

He added that Norwegians have “mostly behaved in an exemplary manner (during the Corona crisis) and followed the recommendations and restrictions that have come. We are confident they will continue to do so in the future.”