The Norwegian government rolled out its new “master plan” for meeting climate goals on Friday, just a day after state meteorologists confirmed that last year was Norway’s warmest ever. The plan for cutting the emissions blamed for climate change met an immediate storm of criticism, but also some praise. 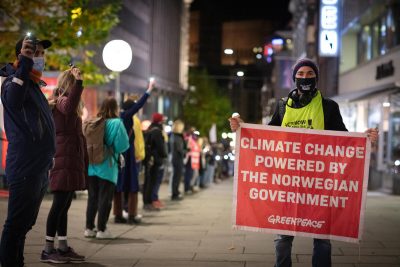 Norwegian governments over the years have been harshly criticized for not doing enough to halt climate change, mainly because of a reluctance to rein in Norway’s oil industry. Here, a protest last fall by environmental organizations when their lawsuit against Arctic oil projects was being heard by the Supreme Court. They court later ruled in favour of the government. PHOTO: Greenpeace/Johanna Hanno

Opposition parties complained that the government’s new plan isn’t ambitious enough, is aimed more at urban areas than rural and doesn’t, for example, halt construction of new highways built to accommodate car and truck traffic that should be reduced. Several parties also claimed the government is late in presenting a plan and that it doesn’t offer enough concrete measures or financing plans.

Prime Minister Erna Solberg, flanked by her ministers from the climate-friendly Liberal Party, stressed that debate now is no longer be over whether emissions must be cut “but how we’ll do it,” and that the new plan will dramatically increase the tempo of emission cuts already next year. Norway will remain an oil-producing nation with the high emissions it generates, but Solberg insisted that the country will nonetheless “do its part of the job to limit climate change.”

Many argue the emissions cuts can’t come soon enough: On Thursday came news that temperatures in Norway rose an average of 2.4 degrees over “normal” last year, and that 2020 was the warmest on record. It was also 25 percent wetter, with far more precipitation and rain throughout most of December.

New annual budgets for climate cuts
Norway has already committed itself to cut emissions through the UN’s Paris agreement. The cuts will be carried out in cooperation with the EU over the next nine years, but now via new annual budgets that must be met each year. The emission budgets show the maximum amount Norway can emit year by year in sectors not subject to quotas, which exclude oil but include transport, agriculture and energy for heating buildings.

The overall goal is to reduce emissions by 45 percent from 2005 levels. It means Norway can emit a maximum of 24.7 million tons of carbon equivalents this year, with a reduction of a million tons each year until total emissions in 2030 amount to 15.7 million tons. 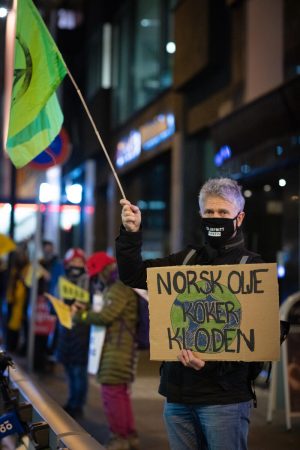 This demonstrator’s sign suggests that Norwegian oil is making the globe boil over. PHOTO: Greenpeace/Johanna Hanno

Solberg and her minister in charge of climate and the environment, Sveinung Rotevatn, claim the plan thus represents “an historic change” in the tempo of emission cuts. They’ll be achieved faster and through measures including far more electrification of the transport sector and, not least, a major increase in carbon taxes, from today’s NOK 590 per ton to NOK 2,000 per ton in 2030. That’s an economic incentive for industry to cut cut emissions that was widely applauded by environmental organizations including ZERO and Naturvernforbund.

“The increase in CO2 fees will affect all decisions throughout the Norwegian economy,” said ZERO leader Marius Holm. “In combination with other new measures, this will pick up the pace of Norwegian climate policy.”

Silje Ask Lundberg, leader of Naturvernforbund (Norway’s chapter of Friends of the Earth), was also positive: “This sends a clear signal that it will become much more expensive to pollute, and that we have to restructure our activities.” Officials at WWF were also satisfied that all sectors will face the equivalent of stiff penalties if they don’t cut emissions.

Both WWF and employers’ organization Virke, however, noted that while a higher price for emissions is “necessary,” they would like to see more “carrots” that would encourage emission cuts. “This should be followed up with some sort of reward program that could make sure acceptance of emission cuts within the population doesn’t fade,” said WWF leader Ragnhild Waagaard,

Solberg maintains that there will be plenty of incentives, and public funding to encourage such things as purchase of electric vehicles and investment in “green, sustainable growth.” She claimed Norway will be cutting emissons, not development.

Promises economic support
“Economic growth and value creation doesn’t need to keep us from reaching Norwegian climate goals,” Solberg said. “Without capital, competitiveness and creative ideas we won’t succeed. Therefore the government will use economic support, taxes and standards to make way for restructuring within business and industry. And we will make sure business has a predictable framework throughout the process.”

She noted how Norway started introducing electric ferries in 2015 and now has around 70 in operation. “That’s been done through stimulus packages,” Solberg said, adding that the government has supported research and innovation and used public sector purchasing to provide a market for such vessels.

Solberg and Rotevatn insisted that Norway’s oil industry will also continue to restructure over the next decade, with government support to develop and use new technology and methods for cutting carbon emissions. They’re covered by a quota system, but oil companies also “need to remain competitive” while being expected to cut their own emissions by 50 percent by 2030. The government has also launched into a major carbon capture and storage project, supports offshore wind energy and has begun promoting hydrogen and battery projects.

Political opposition looms
Rotevatn told newspaper Aftenposten earlier this week that he senses “broad support” in Parliament for Norway’s climate goals, “and with the exception of the Center Party, there’s also broad support for cooperation with the EU.” He noted that both Center and the Labour Party “have varied a lot on climate policy,” but he “hopes and thinks we can agree” on concrete plans for emission cuts.

He faces tough debate, given initial reaction from opposition parties in Parliament.  The Reds Party, for example, prefers putting a priority on public transport nationwide “instead of electric car advantages for wealthy folks in the big cities.” The Greens Party wants to lower public transport fares and criticized the Conservatives-led government for not launching its climate master plan much earlier. The Center Party claimed the plan will “shove costs over to business and industry” and was “unrealistic” in expecting outlying areas to vastly increase use of electric vehicles when there aren’t enough charging stations. Labour complained the plan was “weak” in terms of both goals and programs for meeting them, while the Socialist Left (SV) called the new plan “too tame” and still too slow: “This is only a climate plan for bringing us halfway to our goals,” said SV leader Audun Lysbakken. The conservative Progress Party, which was long skeptical to climate change, was most concerned that new emission-cutting measures could reduce job creation.

The most concrete government proposals are in the transport sector, for example how all new vehicles purchased by the state, counties and municipalities must be electric from as early as next year. Cities may also be allowed to establish “fossil-free” areas where only electric vehicles will be allowed. Solberg defended her goverment’s new master plan and claimed more concrete measures will be rolled out.

“Climate policy isn’t one thing,” Solberg said. “It’s the sum of everything we do, both big and small projects, that will comprise our restructuring and prepare Norway for the future.”