NEWS ANALYSIS: There’s a lot of soul-searching going on among Norway’s most conservative politicians, especially by the Norwegian who twice nominated the now-shamed US President Donald Trump for a Nobel Peace Prize. More liberal politicians in power have also been targeted for having kept quiet too long about the leader of the country widely regarded as “Norway’s most important ally.” 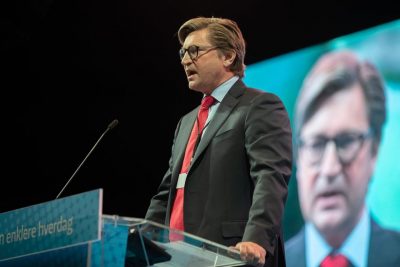 Member of Parliament Christian Tybring-Gjedde of the conservative Progress Party seemed to be having regrets on Wednesday that he had nominated outgoing US President Donald J Trump for a Nobel Peace Prize. PHOTO: Fremskrittspartiet

Christian Tybring-Gjedde, a Member of Parliament for the conservative Progress Party, said on national radio Thursday morning that he now thinks Trump is “mentally unbalanced.” He had long hailed Trump, but now says he was “terrified” by how Trump incited his supporters to march to the US Capitol on Wednesday, to protest presidential the election result that Trump was “false” because he didn’t emerge as the winner. Shortly thereafter, a large mob of Trump supporters broke into the Capitol to disrupt Congress’ formal acceptance of the vote that will usher Joe Biden in as president on January 20. Four people died during the ensuing uproar, viewed as an attack on American democracy.

Tybring-Gjedde, among the most right-wing members of his party, has long hailed Trump and nominated him twice for a Peace Prize, much to the amusement of rivals in Parliament. Tybring-Gjedde cited Trump’s highly debated efforts to launch talks with North Korea’s dictator and, just last year, Trump’s controversial plans for peace in the Middle East. On Thursday, after a long night of dramatic events in Washington, Tybring-Gjedde’s opinion of Trump had changed.

‘Worse and worse’
“Ever since his election defeat (in November), his mental condition has become worse and worse,” Tybring-Gjedde told NRK. “The encouragement he gave supporters yesterday, about marching towards the Capitol, scares me.”

He was referring to Trump’s speech just hours before members of Congress were due to formally approve the presidential election result and declare Joe Viden as the US’ next president. Nor did Trump condemn his supporters’ invasion and vandalism of the Capitol.

“Right now I don’t known whether he should remain in office or just resign at once,” Tybring-Gjedde said. He claimed that the individuals who actually broke into the Capitol and vandalized it must be held responsible for criminal acts, but he admitted there was no doubt that Trump had urged them on, with incorrect claims that he won the election, not Biden.

“He said things that were entirely unacceptable,” Tybring-Gjedde conceded, “and the demonstrators understood it in such a way that they should react. When they reacted as they did, Trump couldn’t control it.” 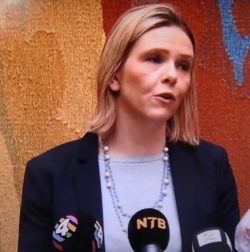 Tybring-Gjedde’s sudden about-face seemed shared by Progress Party colleague Sylvi Listhaug, also among the party’s right-wing (some say populist) faction who’s often been accused of inflammatory rhetoric herself. On Thursday she was grilled on national radio as well, and sounded more chastened than ever before.

Like Tybring-Gjedde, she was suddenly claiming that Trump “was not suited” for his office, and that both the US’ Republicans and Democrats must manage to cooperate better. She also urged reconciliation and praised Biden’s efforts to unite the US.

Other top politicians were also questioned on NRK’s popular morning talk show Politisk kvarter, for failing to directly challenge Trump’s harsh rhetoric and divisiveness, also on an international basis, over the past four years. Prime Minister Erna Solberg of the Conservatives, who was quick to condemn the “unacceptable attack on democracy” Wednesday evening, defended her record, claiming she had objected to Trump’s harsh criticism of the United Nations (where Norway now holds a seat on the UN Security Council), to his ongoing abuse of his rival for the presidency, Hillary Clinton, and for his negative reaction to the Black Lives Matter campaign.

Solberg admitted, however, that all Norwegian government officials face a difficult balance in their relations with the US, which remains “our most important ally” not least on defense issues. It’s not always appropriate, Solberg suggested, for government officials, Norwegian or otherwise, to meddle in US politics, while at the same time needing to promote Norwegian views on important issues including human rights, economic development, defense and climate.

Trump’s ‘unpredictability’ the biggest problem
The Norwegian prime minister admitted that the biggest challenge involving relations with Trump was his “unpredictability.” That was cited by several other top politicians including Labour Party leader Jonas Gahr Støre, Foreign Minister Ine Eriksen Søreide of the Conservatives and the head of the Parliament’s defense and foreign relations committee, Anniken Huitfeldt of Labour. All expect far more predictable policy from the incoming Biden Administration, and also more in line with Norwegian social democratic values.

Asked whether such an attack of citizens against elected officials could occur in Norway, Solberg hesitated before responding that she hopes not. The former Labour-led government was attacked by a Norwegian right-wing extremist on July 22, 2011. He killed 77 people in his protest against immigration policy he viewed as too liberal, but he acted alone, not as part of a mob of rioters claiming an election was false.

“We don’t have that same degree of polarization here,” Solberg said, “and Norwegians generally have more confidence in their leaders.” Some parties like Progress and Center have, however, been accused to intentionally trying to increase polarization, with Center, for example, stressing conflicts between urban and rural areas.

“We’re working hard against extremism all the time,” Solberg added, convinced that those involved in Wednesday’s storming of the Capitol were extremists themselves.