An ‘unacceptable attack on democracy’

Norwegian leaders reacted with shock and dismay on Wednesday to the dramatic events unfurling in what they’d all long viewed as the world’s capital of democracy: “What we’re now seeing from Washington is a completely unacceptable attack on democracy in the USA,” Prime Minister Erna Solberg stated as she and millions of other Norwegians watched how supporters of the defeated US president, Donald Trump, stormed into the US Congress to disrupt confirmation of his successor, Joe Biden. 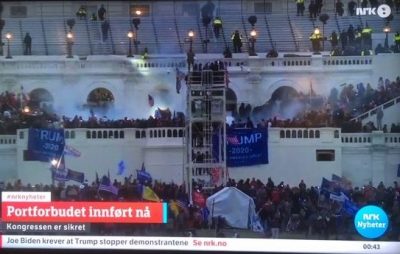 Norwegian Broadcasting (NRK) was among European TV stations sending live coverage of the attack on the US Congress in Washington, in all its embarrassing and frightening detail. PHOTO: NRK screen grab

Solberg stated clearly that “Trump is responsible for stopping this.” She called the photos of the attack on Congress “frightening,” adding that it was “incredible that this is the USA.”

Solberg was far from alone in reacting to what many called an “insurrection” or attempted coup d’etat, incited by Trump himself. He had urged on his supporters earlier in the day, while continuing to falsely claim that the US election in November was fraudulent and “stolen” from him and them.

Solberg’s predecessor, NATO chief Jens Stoltenberg, called the scenes broadcast live from Washington all evening in Europe “shocking,” and wrote on social media that “the outcome of this democratic election must be respected.” Stoltenberg has worked hard to get along with Trump and is well-regarded in Washington, being among the few to be given the honour of addressing Congress last year.

‘Unreal, shocking and scary’
The president of the Norwegian Parliament, who ranks second to the king in the country’s power structure, was also horrified by the violence and disregard for democratic processes. “Unreal, shocking and scary photos and reports from Washington and the Congress,” Tone Wilhelmsen Trøen wrote on Twitter. “This is an extremely serious situation and an attack on American democracy.”

Norwegian Foreign Minister Ine Eriksen Søreide also claimed that Trump had a “special responsibility to make sure the situation comes under control.” Søreide, now holding a prominent role at the United Nations after Norway won a seat on the UN Security Council, called the dramatic events in Washington DC “deeply disturbing and serious” because they’re an attack on democracy.

“The Congress must be able to carry out their constitutional duties (to formally acknowledge Biden as the winner of the US presidential election),” Søreide stated, adding a direct rebuke of Trump: “It’s fundamental in a democracy that the loser acknowledges an election defeat.” Trump continues to refuse to do so.

Hurts the US’ reputation
Labour Party leader Jonas Gahr Støre, a former foreign minister and candidate for prime minster himself, had to concede Norway’s last election to Solberg’s Conservatives and was also disturbed by how Trump remains in denial.

“Storming into the Congress in Washington is a shocking attack on democracy in the US,” Støre wrote on Twitter Wednesday evening. “The historic responsibility will be very heavy for President Trump. This evening’s events have incurred lasting damage to the US’ reputation, but the power of democracy will prevail.”

Støre also told NRK that the scenes playing out in Washington usually are only seen in countries that lack democracy or are in decline. He questioned, as have many others, how those rioting in Trump’s name could breach security and break into the US Capitol, occupy the Rotunda and even enter the offices of Congressional leaders and leave threats on their desks. Støre, who served as Stoltenberg’s foreign minister for nearly six years, said he didn’t view the attack on Congress as a coup but rather as Trump’s legacy.

Støre also recalled a dinner he had three years ago in Oslo with Hillary Clinton, who was narrowly defeated by Trump in 2016. “She said this was a man who wouldn’t give up voluntarily, and that it could become violent,” Støre told NRK. “And she said it so matter-of-factly that it made an impression. But this is very dramatic, because the world views Washington in a different manner than other countries and other national assemblies.”