Hopes ran out for finding survivors

A remarkable search and rescue effort mounted by the Norwegian police, military, geologists, health care workers and other experts “entered a new phase” Tuesday evening. Police gave up hopes of finding more survivors in last week’s catastrophic landslide in Gjerdrum, after yet another slide hit the area. 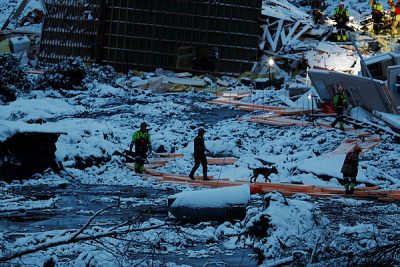 Search and rescue workers, aided by specially trained dogs, carefully go through the slide area using special military equipment to stabilize the ground. The remains of a shattered home can be seen at right. PHOTO: Forsvaret/Torbjørn Kjosvold

“We have done all we can to save lives,” local police chief Ida Melbo Øystese said at a press conference late Tuesday afternoon. “But even though we have given up hope of finding more survivors, the search is not over. We’re going into a new phase now to find those still missing.”

That number remained at three, after seven other bodies were pulled from the rubble of an entire neighbourhood swept away by the slide early last Wednesday morning, December 30. That puts the expected death toll at 10 from the slide that also has left hundreds of people homeless and hundreds others under ongoing evacuation orders because of unstable ground also where they live.

“Even though the acute rescue phase is now over, we will do all we can to help the residents of Gjerdrum get back to som sort of normal lives again,” Øystese said at her sad but emphatic press briefing.

Dr Fridtjof Heyerdahl, medical leader of the search and rescue effort, said “the sum of what we’ve been through indicates that unfortunately there are no longer any presumptions of finding anyone alive.” The three people still missing and believed trapped in the mud and debris could no longer have lived through their ordeal.

Children among the victims
They include 50-year-old Ann-Mari Olsen-Næristorp and her 13-year-old daughter Victoria Emilie Næristorp-Sørengen, whose row-house at Nystulia 36 was among those that disappeared in the slide, and 49-year-old Rasa Lasinskiene, who also lived at the same address. She had two children, had just stepped out with her dog when the slide hit and was speaking with her husband on the phone when the connection was broken. Among those confirmed dead is a young couple with a small child, all of whom were killed in the slide.

Aided by advanced equipment provided and operated by Norwegian Special Forces, “we have clarified and ruled out that there are any areas left within the slide area where people could have survived,” Heyerdahl added. “This has been an emotional and very difficult decision to make, but it’s nonetheless correct and logical to enter another phase of the search now.” 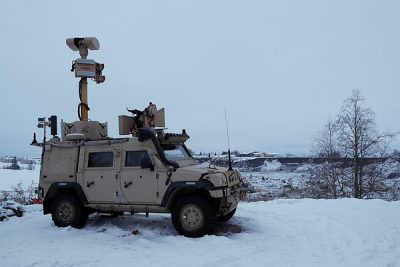 A tactical vehicle from the Norwegian military’s Special Operation Commando helped searchers see into the landslide area at Gjerdrum. Other equipment helped stabilize the ground to allow the search in which specially trained dogs and heat sensors played an important role. PHOTO: Forsvaret/Torbjørn Kjosvold

Gjerdrum Mayor Anders Østensen called the decision “hard, but we have expected it. It’s very difficult to even think about everyone affected by this (the slide itself). Ten people have been affected in the worst possible way.”

The area was hit by yet another mud slide at mid-day on Tuesday, not far from the area where search and rescue crews were still working as they have, day and night, for the past seven days. Alarms were sounded and they had to start running for an evacuation area. Kenneth Vangen of the local fire department told Norwegian Broadcasting (NRK) that it took around a minute to get everyone out of the new slide area.

It covered an area of around 30 meters wide, two meters deep and 10 meters high. Local geologists on the scene said it was normal and expected that more if smaller slides would occur after the first massive one last week. Search efforts resumed, now for those believed dead.

Investigations loom
The cause of the slide remains unclear and will be the prime topic of multiple looming investigations. Theories run from the effects of climate change, building activity in the area, re-routing of a local creek and erosion caused by heavy precipitation. No one is sure what set it off shortly after 4am in the middle of a snowstorm on a dark winter night.

Snow continued to fall until the weather suddenly turned clear and sunny on Sunday. Temperatures, though, have fallen to as low as minus-18C in the area, contributing to the decision that humans could no longer have survived.

Prime Minister Erna Solberg issued a statement Tuesday afternoon that it was “with great sorrow that we have received the message that there’s no longer any hope of finding survivors of the slide at Ask in Gjerdrum.” She once again thanked all those participating in the massive search and rescue effort, that involved new and unique cooperation between civilian and military forces.

“I want to thank the emergency crews who have done all they could to save lives,” Solberg said. They had stressed all along that victims could have found themselves trapped in areas with air pockets, wall insulation material around them to help them brave the winter temperatures, and even melting snow to drink. If they weren’t badly injured, reasoned the crews, they’d have a chance.

Hopes rose on Monday when a dog suddenly hopped out of an air pocked in the debris of a house. The dog was quickly reunited with its owners.