There are few signs that the Corona crisis put a freeze on holiday shopping, with sales brisk at most retail stores and soaring at online retailers. Officials at Norway’s largest bank, DNB, see “nothing that suggests a crisis” within the retail sector as a whole. 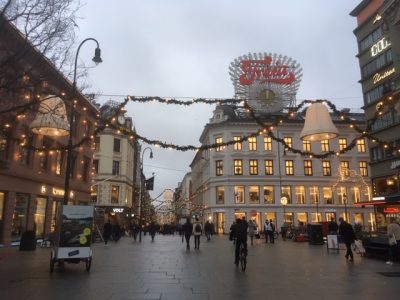 Near-constant rain literally put a damper on some holiday shopping in December, like here on Karl Johans Gate in Oslo, but much higher sales in November are likely to make up for any losses. PHOTO: NewsInEnglish.no/Nina Berglund

Oftedahl said retail spending during the important Christmas shopping season followed a trend seen throughout the year. Even though unemployment increased sharply during the Corona crisis, those who still have their jobs and couldn’t travel abroad seem to have been spending much more money at home. Travel budgets ended up fueling home remodeling, gardening and, most recently, Christmas gifts, good food and drink.

Oftedahl tracks debit- and credit-card use, which now accounts for the vast majority of all spending. Use of cash has been discouraged during the Corona crisis, and hasn’t even been accepted at many retail stores.

Spending up 15 percent
Current statistics show that DNB’s own customers spent nearly NOK 20,000 on average from November 1 to December 24. That’s up around 15 percent from the spending tallies in the same period last year.

Much of the spending occurred in November, suggesting that Norwegians followed state authorities’ requests that Christmas shopping be done early, to relieve crowding in the stores during the pandemic. “We can see that people made fewer trips out for shopping, but spent more money on each shopping trip,” Oftedahl told DN.

Far from all their shopping was done in stores, with online sales continuing to boom. “In this sector, spending has risen enormously, especially among older Norwegians,” Oftedahl told DN. The bank’s figures show that online sales accounted for 56 percent of all holiday shopping. Around 85 percent of all shopping still occurs in stores, but shopping online has become natural for most age sectors.

Virke has set the amount at as much as NOK 23 billion (USD 2.7 billion). “Much of that has been moved over to the retail sector,” Andersen told DN, “but not all of it. There’s also been a considerable increase in savings.”

Not all retailers did well this past holiday shopping season, which remained plagued by Corona. Sales of clothing, shoes and cosmetics declined as much as 9 percent, according to DNB, probably because of all the holiday parties, dinners and company julebord that were cancelled. No one seemed to want to be all dressed up, with nowhere to go.