NEWS ANALYSIS: Norway’s monarch isn’t the only one holding a traditional New Year speech aimed at boosting national pride and unity. The prime minister and president of the Sami Parliament do so as well, and this year their addresses were more important than ever.

Prime Minister Erna Solberg spoke, as usual, from her official residence in Oslo, still decorated for the Christmas holidays. She had hoped they could be celebrated in a “more normal” manner despite restrictions, but instead they set off another wave of infection that’s now forced another crackdown. It came on top of a catastrophic landslide north of the capital. PHOTO: Statsministerens kontor/NTB/Haakon Mosvold Larsen

King Harald V has already won kudos for his direct and sympathetic address to the Norwegian people on New Year’s Eve. His speech came not only after months of Corona crisis measures that have dramatically changed everyday life, but also while search and rescue operations were still going on after a massive landslide northeast of Oslo. He offered consolation, support and understanding to all involved, and later met with survivors as reports of confirmed deaths started rolling in.

The monarch also noted how the crises have tested Norwegians’ values, which are prevailing in both cases. He also gave an unusual nod of appreciation as to how national and local government officials, both elected and appointed, have handled the Corona crisis.

“We have shown that we have public officials who can meet the challenges, also in crisis times,” King Harald said. Even left-leaning newspapers that editorially oppose the current Conservatives-led government have acknowledged such as well, with Dagsavisen, for example, noting that the king gave the government “some well-deserved praise.”

‘Grateful, proud and touched…’
Corona alone was enough to elicit a need for such support in trying times. Then came the landslide tragedy in Gjerdrum and the rapid response to it, which also prompted praise from Prime Minister Erna Solberg in her speech later on New Year’s night.

“I am deeply grateful, proud and touched over the way in which the Norwegian people have handled the greatest challenge for our society since the Second World War,” Solberg said. She began her speech, as had King Harald, though, by addressing the landslide that has left scores of families with only the nightclothes they were wearing when it hit: “Our thoughts go to everyone affected by this catastrophe,” Solberg said. “Our gratitude goes to the emergency crews who have carried out formidable work.” 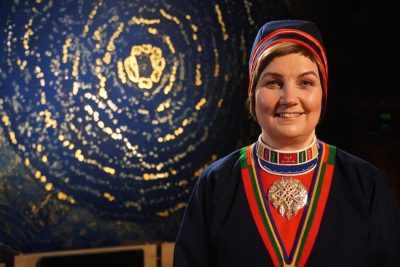 Aili Keskitalo, president of the Sami Parliament, also had words of encouragement for Norway’s Sami population, which continues to experience discrimination but also rising interest in the Sami language and culture. PHOTO: Sametinget

The president of the Sami Parliament, Aili Keskitalo, also began her annual remarks by noting how the pandemic “has hit the entire world community and our peaceful home lying far to the north.” It has also closed borders to Sweden, Finland and Russia that usually are open to the indigenous Sami who move around with their reindeer herds.

“Covid-19 has hit us with sickness and deaths, through closed borders, economic uncertainty and a lack of social contact and cultural arenas,” said Keskitalo, wearing lulesamisk folk dress for the occasion and speaking in Samisk with Norwegian subtitles. “It came after a tough winter with lots of snow, which especially made reindeer grazing difficult.”

Empathy and hope
All three national leaders expressed empathy with the people, as King Harald and Solberg made it clear that 2020 was a rotten year for most everyone, and Keskitalo noted how the Sami don’t always have access to health care services and are more vulnerable to discrimination during a pandemic. All stressed how everyone has missed being able to gather for social and cultural events.

All three also offered hope and prospects in their nationally televised speeches for better times ahead. Solberg candidly admitted that her government often had to make rapid decisions despite lots of uncertainty. “Not everything was made right on the first try,” Solberg said, “but we have modified decisions when we knew more.” She also appreciated cooperation from opposition parties in Parliament and the Norwegian people. She praised how people have taken care of one another during the Corona crisis, and called the quick development of the Corona vaccine “a triumph for science and international cooperation.”

It’s still too early to lower their guard, though, and Solberg’s government felt compelled to order new, more restrictive Corona containment measures just three days later. But from her and the king’s empathy to Keskitalo’s expressions of delight over progress in more use of the Sami language and interest in Sami culture, the leaders prodded Norwegians into a New Year with as much encouragement as they could.

“In crisis times, it’s important to have speeches that unite us,” editorialized Dagsavisen. “It’s a good tradition.”