Prime Minister Erna Solberg and her government imposed a new round of even tougher social restrictions on Sunday evening, all aimed at halting the spread of the Corona virus. The bans on social gatherings take effect from Monday (January 4). 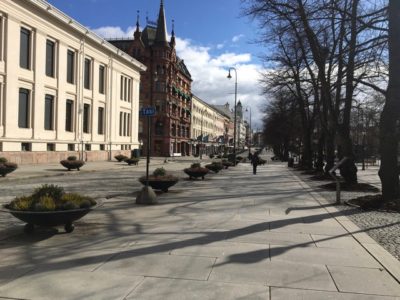 The streets of Oslo can now be just as quiet as they were here in March, when the Corona crisis began. PHOTO: newsinenglish.no/Morten Møst

“We have seen after Christmas that fewer people are testing themselves, and of those who do, the portion of positive tests is going up,” Solberg said at a press conference in Oslo Sunday evening. “Infection is increasing and spreading to new areas of the country. I’m asking everyone to take part in efforts to avoid a new wave of infection.”

Solberg’s government was responding to new recommendations from both the state health directorate and the public health institute FHI. They’re all aimed at halting an ongoing spread of the virus and are in force for the next two weeks.

The most invasive: “Avoid inviting guests home. Wait 14 days before having visitors.” Exceptions are in place for those needing health care services at home and visits to those “in the last phase of life.”  Those who live alone can also receive visitors or visit others if the visits involve only one to two friends. Children attending day care centers and elementary school can receive visitors from their own cohort.

The government, at the request of health care authorities, also urges all organized sports, cultural and other recreational activities to postpone gatherings until after January 18.

The government had already announced that all instruction at the college-, university- and trade school level would be digital until January 18. The goal is to discourage young people from traveling back to school after the Christmas holidays at the same time, and thereby risking virus exposure.

All shopping centers and stores are also urged to impose restrictions on how many customers can be inside a store at any given time.

The government is also extending its earlier limit of five visitors inside a home to events outside the home as well, for example those who rent a venue to hold an event.

The government also urged local governments to impose obligatory use of face masks in public places, to urge use of home offices and to close athletic centers, bingo parlours and swimming halls.

Not a ‘Happy New Year’
Prime Minister Solberg began Sunday evening’s press conference by wishing everyone a “Happy New Year”, but added that it “hadn’t started like we’d hoped. We are uneasy about the development in infection numbers,” adding that “we also have an ongoing search and rescue operation at Gjerdrum (where a massive landslide has destroyed homes and killed at least seven people).”

Her biggest national issue, however, was concern “that a new wave of infection was on the way.” She’s worried that the Corona virus is now spreading into new areas of Norway and increasing elsewhere in Southeastern Norway, Rogaland, Nordmøre, Trøndeland and “several communities” in Northern Norway. Solberg is worried that infection spread during the Christmas holidays and “when folks met indoors at parties, hytter and religious gatherings.”

Hence the new crackdown over the next two weeks. “I’m asking you all to not have any visitors at home!” Solberg emphasized on Sunday. “Wait 14 days before you invite anyone home, or go visit others. We have to take a break from our social lives for at least two weeks.”