Prime Minister Erna Solberg has been firmly guiding Norway through its worse crisis since World War II plus a few more during the past year, and that’s clearly maintained her popularity among Norwegian voters. Fully 53 percent favour her over the opposition’s candidate for prime minister, and her Conservative Party remains the largest in the land. 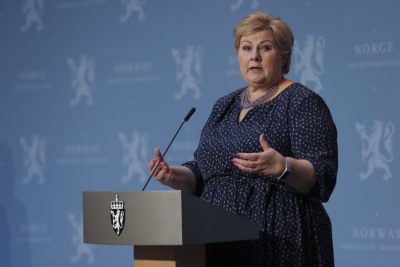 Prime Minister Erna Solberg, at one of her many press conferences and public appeals during the recent Corona crisis. PHOTO: Forsvaret/Torbjørn Kjosvold

The numbers confirmed strong voter support for Solberg, who has consistently won kudos for how she’s handled the Corona crisis. Solberg, Health Minister Bent Høie and Justice Minister Monica Mæland have all relied heavily on health care professionals, mostly adopted their recommendations, and maintained high public profiles through frequent press conferences. Together they’ve thus won public confidence and Norwegians have largely followed the restrictions that are in place.

It’s all left Norway with among the lowest infection and death rates in Europe, despite recent outbreaks of the Corona virus. Now the numbers in the latest public opinion polls reflect public satisfaction, with 53 percent of Norwegians questioned saying they preferred her as prime minister over chief rival Jonas Gahr Støre of the Labour Party. Only 27 percent preferred Støre as prime minister while the rest were undecided.

Labour now only third-largest
Støre’s struggling Labour Party, which ranked as Norway’s largest party for decades after World War II, has also lots its grip not only on the top spot but the second as well. In the first so-called “party barometer” of the year, conducted by research firm Norstat for newspaper Aftenposten and state broadcaster NRK, Solberg’s Conservatives emerged as largest once again, if only with 22.6 percent of the vote. Then came the ever-growing Center Party, now with 21.3 percent of the vote and then Labour in third place with 20.1 percent.

The new party dynamics at the start of a national election year show Norway now with three main parties, all around the same size, and lots of small parties, some of which have lost so many voters that they wouldn’t qualify for full representation in Parlliament. Both of Solberg’s two government partners (the Christian Democrats and the Liberals) suffered that fate with just 3.7- and 2.5 percent respectively. Their former fourth partner, the Progress Party, checked in with just 11.3 percent of the vote, followed by the Socialist Left (SV) with 8.9 percent.

It all leaves the left-center parties with more potential votes than Solbergs right-center parties, a trend expected to continue through to the election. That may mean that Solberg’s personal popularity won’t be enough for her to hang on to her prime minister’s post for a third term.

It doesn’t seem to fluster her at present. Solberg has noted that she’s a calm person by nature and that’s helped when she’s dealing with ongoing emergency situations around Corona, the economic problems it has imposed on many Norwegian employers and then, last week, a catastrophic landslide that claimed 10 lives.

Tough against Trump
Solberg was also gaining support for her suddenly harsh criticism of outgoing US President Donald Trump, following his refusal to acknowledge defeat in the November presidential election and then encourage supporters to continuing demonstrating in his favour at the Capitol in Washington DC. That ultimately led to an attack on the Congress in what Solberg and others have also called an attack on democracy itself.

Solberg continued her verbal assault on Trump Thursday morning, claiming live on national radio that Trump “has violated fundamental democratic principles” and contributed over the years to severe polarization of the USA. It was also “strange,” Solberg said on state broadcaster NRK, “that the National Guard was sent in so late. If it’s true that it was (US Vice President) Mike Pence who called in the National Guard, and not Trump, it’s a major collapse in leadership.”

Solberg also continued to question, along with many others, how such an important building as the Capitol could be so poorly guarded. “I think there’s no doubt that there were other norms and evaluations made regarding security than during the Black Lives Matter-demonstrations,” Solberg said, when the building was heavily secured and ringed by both local and federal troops.