Trump: Biden ‘Has Waved the White Flag on Life – He Doesn’t Leave His Basement’ 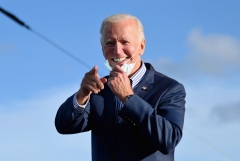 (CNSNews.com) – Former Vice President Joe Biden has “waved the white flag on life,” because “he doesn’t leave his basement, President Donald Trump said Monday in response to Biden’s criticism that the president has waved the “white flag of defeat” in controlling the coronavirus.

Speaking to reporters after landing in Allentown, Pa., Trump was asked to respond to Biden’s comments.

Biden seized on a comment by White House Chief of Staff Mark Meadows, who told CNN’s “State of the Union with Jake Tapper” on Sunday that “we are not going to control the pandemic.”

“It was a candid acknowledgement of what President Trump’s strategy has clearly been from the beginning of this crisis: to wave the white flag of defeat and hope that by ignoring it, the virus would simply go away,” Biden said in a statement.

Meanwhile, the president said he’s not giving up on the pandemic.