Pelosi: If We Don’t Agree to the Science, We’re Just Giving Trump Money to Spend Any Way He Wants 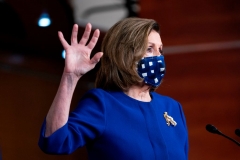 Speaker of the House, Nancy Pelosi, Democrat of California, holds her weekly press briefing on Capitol Hill in Washington, DC, on October 22, 2020. (Photo by ALEX EDELMAN/AFP via Getty Images)

(CNSNews.com) – When asked to respond to calls from Democratic governors and a Democratic congressman who say she should put differences aside and agree to a COVID-19 relief bill, House Speaker Nancy Pelosi (D-Calif.) told CNN’s “State of the Union with Jake Tapper” that “if we don’t’ agree to the science to crush the virus,” it would be “just giving money to the president to spend any way he wants.

“Three Democratic governors in the Midwest, Whitmer of Michigan, Evers of Wisconsin, and Walz of Minnesota, three Democratic governors wrote to you, President Trump, and other congressional leaders saying, among other things — quote – ‘We implore you to put differences aside and agree to another much needed COVID-19 relief bill,’” host Jake Tapper said.

“In addition, one of your own members, Congressman Max Rose, said this week that the Democratic Party needs to learn, to a certain extent, how to declare victory and go home. You’re getting a lot of messages from Democrats saying: This is good enough. We need to say yes,” Tapper said.

“Welcome to my world. That is not a lot of messages, although I respect each and every one of them. The fact is, if we don’t agree to the science to crush the virus, if they did what is in our bill that science dictates that we do, then, if we do that, we can lower the incidence of the virus in certain areas, open schools, open businesses and the rest,” Pelosi said.

“If we don’t, we’re just giving money to the president to spend any way he wants, and that has not been in furtherance of crushing the virus. So, again, in terms of — we all want an agreement. Nobody wants it more than the House Democrats. We represent these people. We have been fighting for food for the hungry, rent assistance for those who may be evicted, but, most importantly, we really have to stop the spread of the virus,” she said.

Tapper pointed out that Pelosi said a few days ago that a COVID-19 relief package legislation needed to be written by the end of the week to get it passed by Election Day.
He asked Pelosi if it’s fair to say that a relief package is not going to be signed into law before Election Day, that there isn’t time to do it.

“Well, you know, I will never give up hope. I’m optimistic. We put pen to paper and had been writing the bill, based on what we hope will be the outcome, what they said they would get back to us on. Here’s the thing. For us to do anything — I want to just say to our friends out there who are suffering — and the country is suffering. Working families are suffering, millions more into poverty. In the month of September, nearly 900,000 women left the work force. So, we have to act,” Pelosi said.

“To do anything, though, that does not crush the virus is really official malfeasance, and to crush the virus, we just have to follow the science, testing, tracing, treatment, mask-wearing, ventilation, separation, and the rest, and that is what Vice President Biden has put forth. We have it in our bill. They said they’re going to get back — last week, you remember, they said, we will support the testing language with minor touch. Well, that was 55 percent of the language,” she said.

“We’re still waiting for the final OK, and that is a central issue in all of this. We cannot just say, President, here’s trillions of dollars, spend it any way you want. We have a plan, a strategic plan,” the speaker said.

Tapper asked Pelosi when is the “drop dead deadline” for when a deal cannot be done before Election Day. He noted that there are 8 million more people in poverty and women who dropped out of the work force probably because their kids are doing remote education and they have to be home with them, so they’re giving up paychecks.

“Well, I do think — as I say, we’re ready. We can change some words in the bill, should they come back with some modifications, but you mentioned schools. Schools are — children should be safe in schools. We can make that happen across the country. It only takes more money, and that is for separation, for ventilation, for technology, for more teachers and the rest, children learning, parents earning,” Pelosi said.

“So it is related to the separation that we say in our health piece, but the education piece is another policy piece where we have some disagreement. Otherwise, we can negotiate the rest of it,” the speaker said.

TAPPER: So, we know that the White House has moved closer to your position on lots of issues, coronavirus testing, contact tracing strategy, unemployment benefits, local government — local government…

PELOSI: No, no. Excuse me. They haven’t yet.

TAPPER: Well, they — so, they said they would.

PELOSI: But they haven’t yet.

TAPPER: And you’re waiting to see it on paper.

PELOSI: They haven’t yet, and also same thing, they keep moving the goalposts. They — every time they say we move the goalposts, that means they’re projecting what they did, but let’s just — let’s be hopeful. We’re nine days before an election. We’re trying to unify the country, and one way to do it is to come together to crush the virus, so that we can open our economy, open our schools, feed our people, 17 million children food-insecure in our country, but, again, the answer is, crush the virus.

TAPPER: So, I get that, but it just seems like they keep moving closer and closer.

TAPPER: I get that you’re waiting for it on paper, but it just seems like, you’re winning. I mean, that’s what it seems like to me. I’m looking at all the things that the White House is moving forward to your position on, and it seems like you could take yes for an answer.

Tapper asked if the Democrats win the White House, the Senate and keep the House, whether Pelosi will hold out until the Democrats have control of everything and they can get a bill more to her liking or will she still go ahead and work with Trump and Senate Majority Leader Mitch McConnell (R-Ky.).

“That latter, for sure. I mean, people need help right away. What I say to them, though, what we are doing right now is to make the bill bigger, better and safer for you, and the benefits will be retroactive, but, no, we want it the sooner, the better, and that’s why we are making concessions. We’re making concessions too, you know, and so, no, no, the sooner, the better, and Mitch has even — the leader has even said, keep working, and he doesn’t want to do it before the election,” Pelosi said.

We want to do it as soon as possible. I thought the president did too, and that was part of the leverage that each side had, that we both wanted an agreement. Why would we even be talking to each other if we didn’t believe that we could reach an agreement? So, again, it could happen this week in the House, but that’s up to Mitch as to whether it would happen in the Senate and go to the president’s desk, which is our hope and prayer,” she added.