Can Pre-Flight COVID-19 Testing Get Travelers Back On Planes? 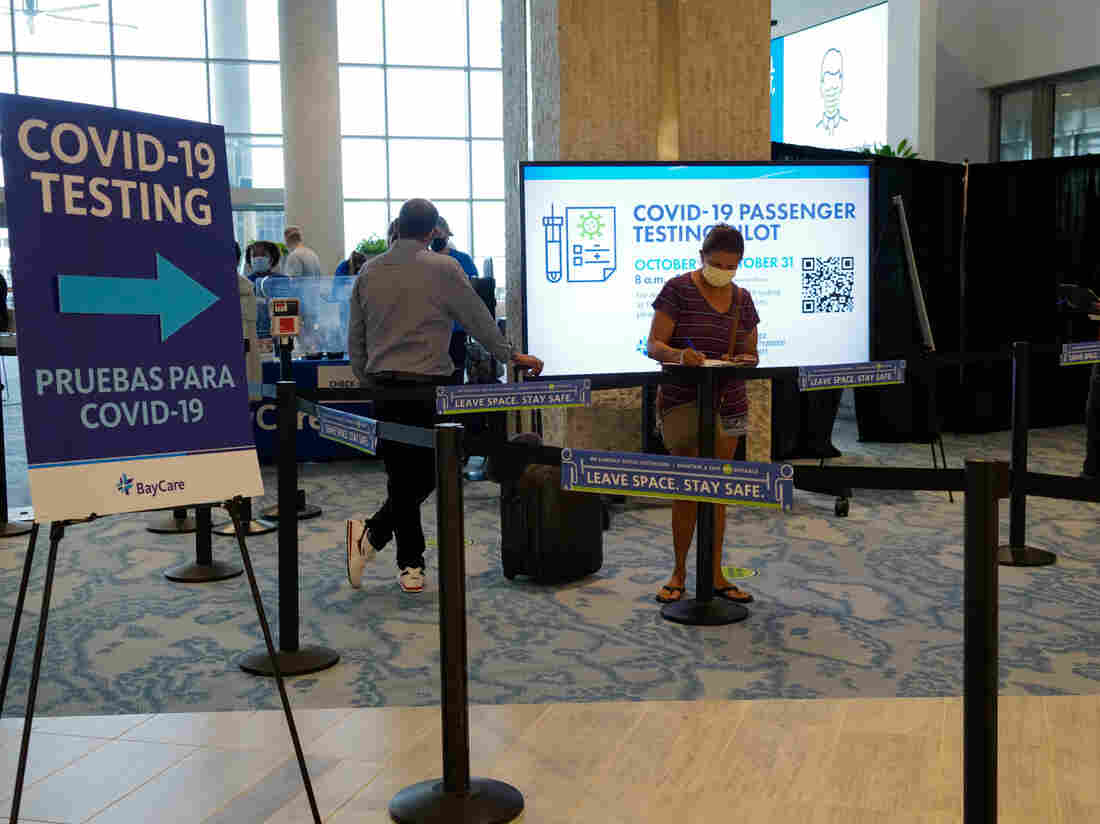 The Tampa International Airport has started COVID-19 testing for passengers with a boarding pass or proof of a reservation for a flight in the near future. Danny Valentine/Hillsborough County Aviation Authority hide caption 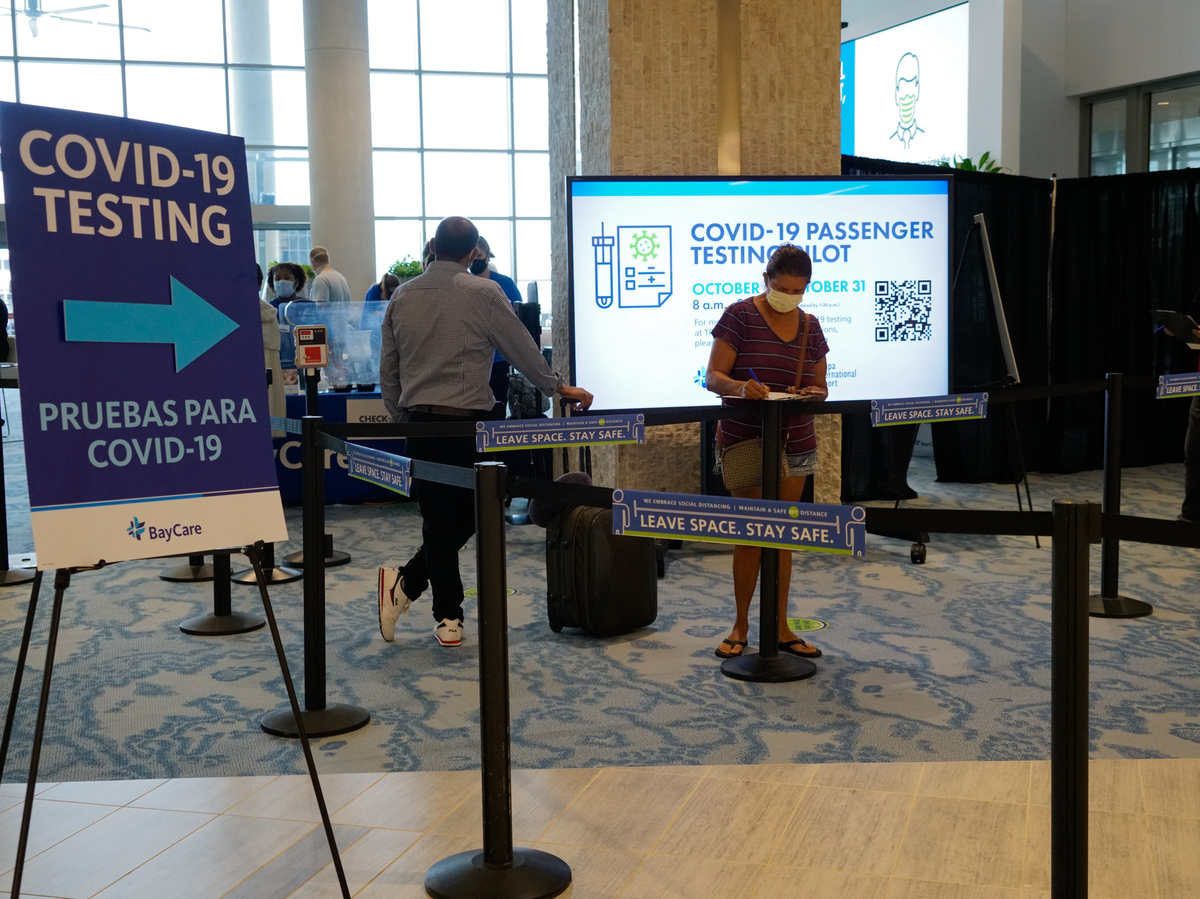 The Tampa International Airport has started COVID-19 testing for passengers with a boarding pass or proof of a reservation for a flight in the near future.

For people who are itching to travel, the airlines are working hard to offer reassurance. They’re requiring masks, disinfecting airplane cabins between flights, and using hospital grade HEPA air filtration systems. Airlines are also touting a recent study that shows that modern aircraft ventilation systems help prevent the spread of the coronovirus and suggests the probability of spreading and contracting the coronavirus on even a packed airline flight is low.

Now they’re offering one more thing in hopes of putting travelers’ minds at ease about flying: testing for COVID-19 at the airport, before you board your flight. The tests are allowing some travelers to reschedule and take vacations they had to cancel or postpone months ago.

Matt Battiata and his wife and four kids had to postpone a dream vacation to Hawaii’s lush landscapes and sparkling beaches back in March, when the island state began requiring every traveler to self-quarantine for 14 days upon arrival. That essentially shut down tourism there. After all, who would want to fly all the way to Hawaii just to be trapped in their hotel room for two weeks.

“We’re just happy to be able to come and visit,” Matt Battiata said after presenting proof of the family’s negative Covid tests to airport workers on the first day Hawaii reopened to those who test negative for the coronavirus.

“We got a rapid test, it took about 30 minutes, you know, a nasal swab test,” Battiata said, adding that “everybody’s clear, yeah, so we’re very excited.”

Airlines are excited, too, to get paying customers back on their planes, so they’re helping facilitate COVID-19 testing for travelers heading to certain destinations, like Hawaii. And some are even offering on-the-spot, rapid response testing at the airport before passengers go through security.

United Airlines was first to announce on-the-spot pre-flight testing, which it offers only at San Francisco’s airport for Hawaii bound travelers. For results in 15 minutes, it costs you $250, on top of the airfare. There are also less expensive drive-up or clinic testing options, which provide results usually in less than 48 hours.

United and other airlines have worked with Hawaii public health officials to make sure the tests meet the state’s requirements for accuracy and reliability. 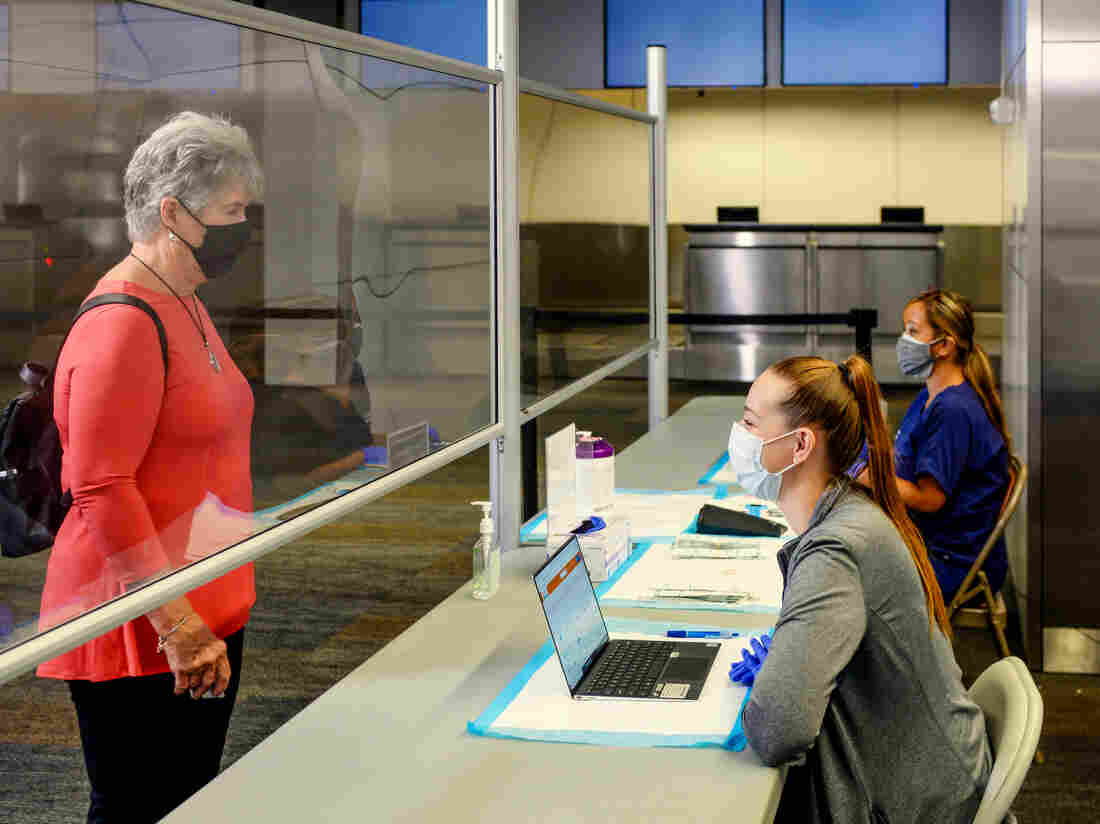 United Airlines was the first to announce on-the-spot pre-flight testing, which it offers only at San Francisco’s airport for Hawaii bound travelers. Courtesy of United Airlines hide caption 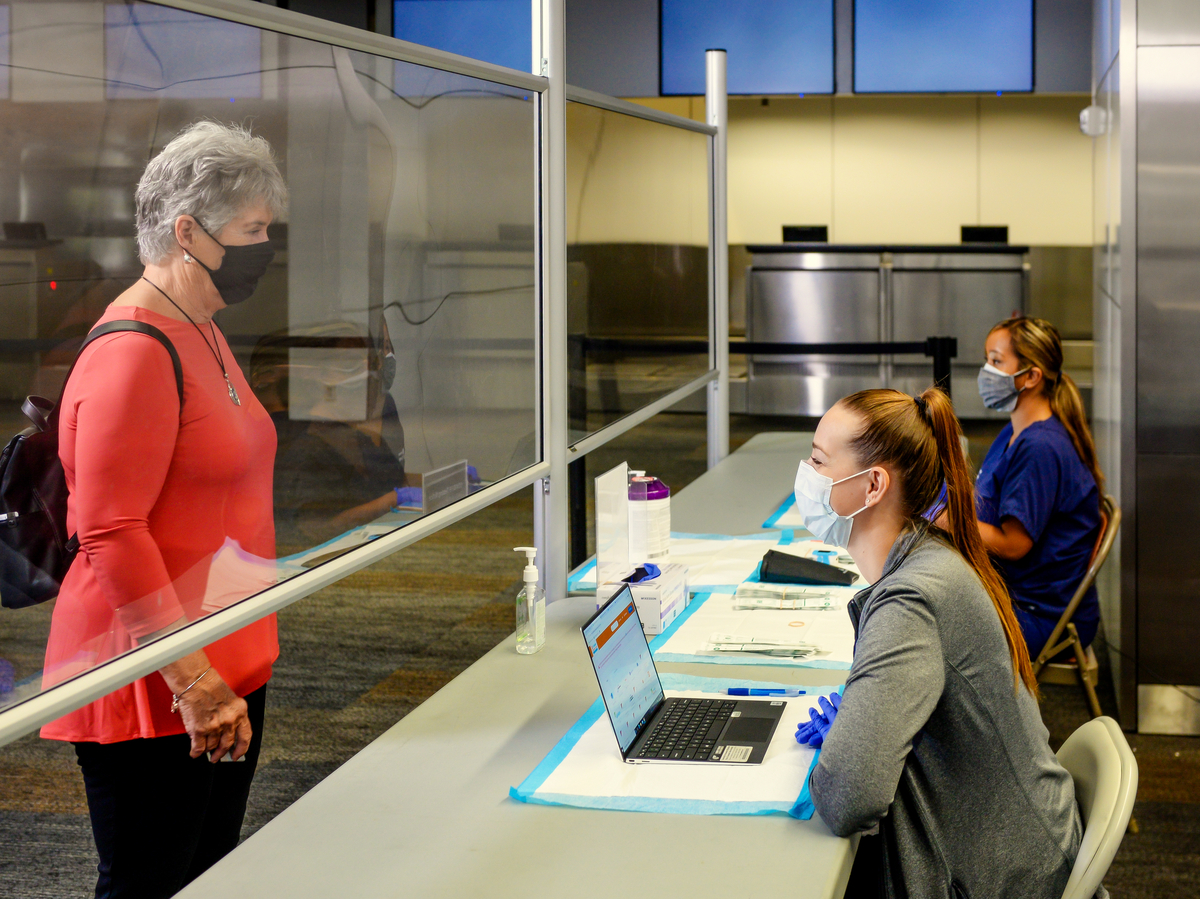 United Airlines was the first to announce on-the-spot pre-flight testing, which it offers only at San Francisco’s airport for Hawaii bound travelers.

“We do the test right here in the main terminal,” says Joe Lopano, CEO of Tampa International Airport. “We only test travelers, so you have to have either a boarding pass or proof of a reservation for a flight in the near future.”

And Lopano says the testing “is not just destination specific or airline specific. Any traveler going anywhere on any airline can get the test.”

The Tampa airport is offering two kinds of tests.

“The rapid test, which will give you results in 15 minutes, costs $57,” Lopano says. “And then the more accurate PCR test costs $125 and you get your results within 48 hours.”

Lopano says some people will take the rapid test on the day they’re flying to have some reassurance before visiting friends and family, while those going to specific destinations that require travelers to test negative less than three days before arrival will come to the airport a day or two ahead of time to take the more reliable PCR test.

“You know, this pandemic is a threat to our business, so we have to find a way to work through it,” Lopano says. “[The COVID-19 testing] helps. It’s not the ultimate solution which a vaccine would be. We want to be proactive. We have to be part of the solution on this virus.”

“What the airlines and airports are trying to do is remove every possible obstacle people have when they start to think about taking a trip,” says Henry Harteveldt, president and travel industry analyst for the Atmosphere Research Group, a travel industry research firm. “They want to make it as easy for people to travel and to travel confidently.”

But public health experts say not all rapid response tests are equal and some are not all that accurate.

“Most of the rapid tests that are inexpensive and can be done frequently and easily have a lower sensitivity,” says Mercedes Carnethon, an epidemiologist and professor of pulmonary and critical care at Northwestern University’s Feinberg School of Medicine. “And what that means is that the likelihood that they will actually identify a positive case in an asymptomatic individual is fairly low.”

“You can get a negative test but in fact, a day or two later, your viral levels can surge and then you’re really quite infectious,” Carnethon says. She adds that she fears on-the-spot, rapid result testing may give travelers “a false sense of security,” especially those coming from areas where the number of COVID-19 cases are surging again, who may then believe that they are coronavirus-free, when they still may be carrying the virus.

Coronavirus Maps: How Severe Is Your State’s Outbreak?

“I don’t see a reality in which you can test your way out of the behaviors that are directly related to preventing the spread of the disease,” Carnethon says, pointing to high profile events, such as the White House Rose Garden ceremony where President Trump announced he was nominating Amy Coney Barrett to the Supreme Court. “Much was made over statements that everyone was tested and tested negative before they were able to come. And yet we see transmission.”

Nonetheless, a growing number of airline, travel industry and business groups are calling for widespread pre-flight coronavirus testing to eliminate the need for travel bans and quarantines, in an effort to jump start an industry decimated by the pandemic. Industry figures show that domestic air travel is down more than 60% from pre-pandemic levels and international travel is down 78%.

The U.S. Chamber of Commerce, the U.S. Travel Association, the International Air Transport Association, Airlines for America, airline employee unions and others are calling on the Trump Administration, state governors and several foreign countries “to pursue a risk-based and data-driven approach to COVID-19 testing which would obviate the need for quarantines and travel bans so that the travel network can be safely reopened.”

The group say 18 states currently have some kind of quarantine requirement in place for travelers from out of state. The U.S. still bans entry by nearly all non-U.S. citizens who recently were in China, the United Kingdom, Ireland, Brazil, Iran and parts of Europe. And nearly all of Europe still prohibits most U.S. travelers from entering.

The groups say “the continued restrictions on international travel and differing state and international quarantine policies are hampering the recovery of the U.S. economy.”