Outspent In The Homestretch, Trump Campaign Says Its Ground Game Is Stronger 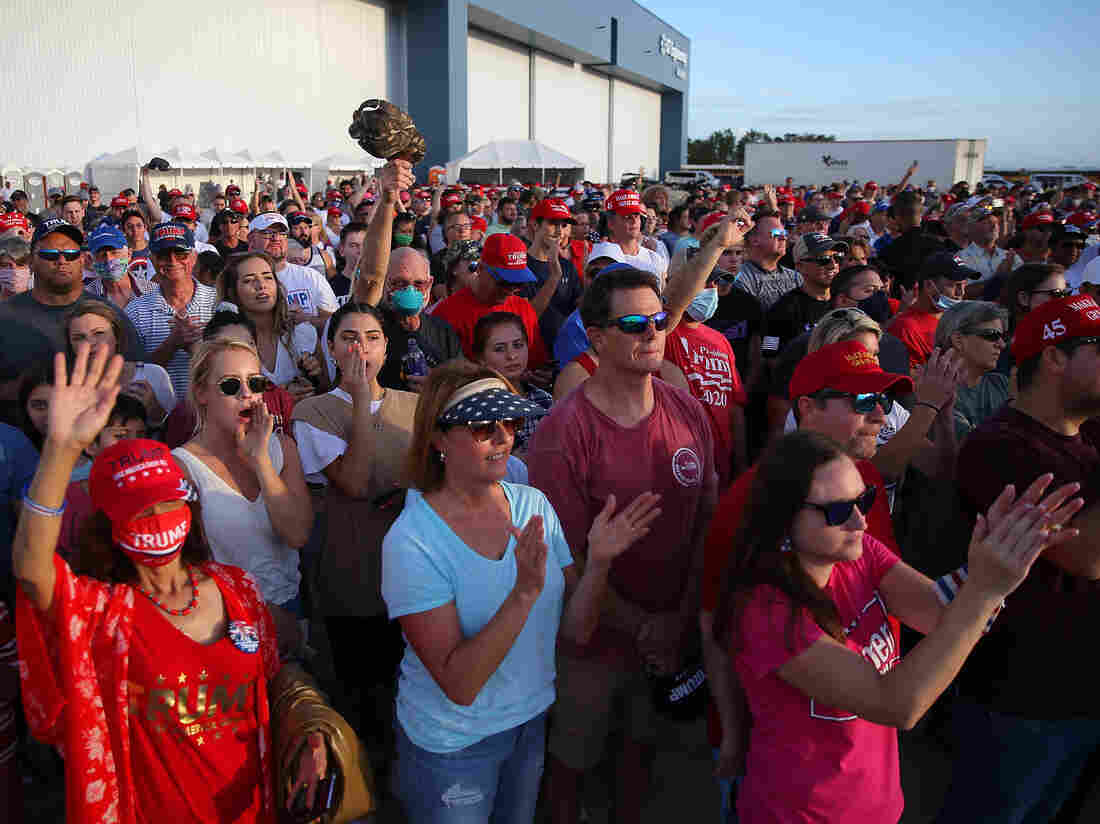 Supporters cheer during a Trump rally in Pensacola, Fla. Rallies and in-person events have been a key part of the campaign strategy, even in the midst of the pandemic. Jonathan Bachman/Getty Images hide caption 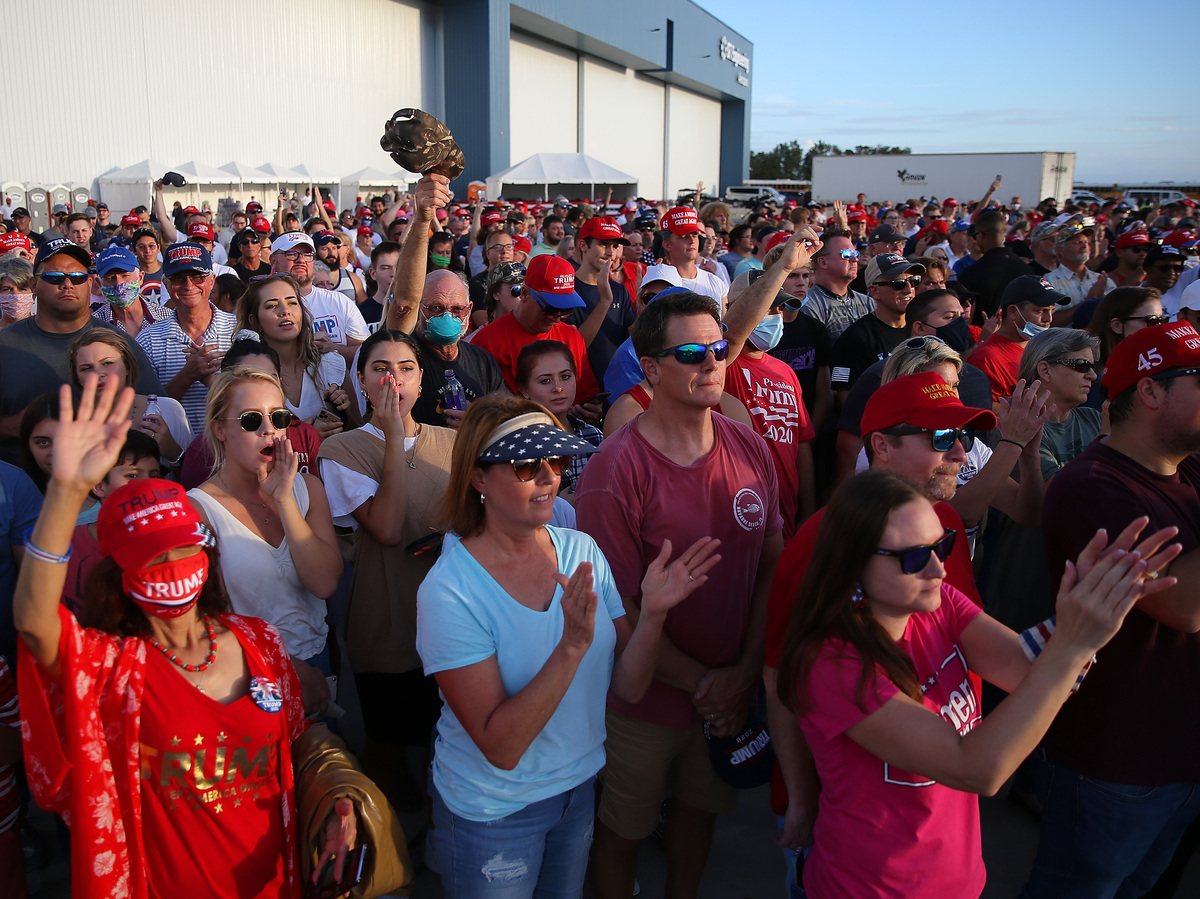 Supporters cheer during a Trump rally in Pensacola, Fla. Rallies and in-person events have been a key part of the campaign strategy, even in the midst of the pandemic.

President Trump is closing out his campaign for reelection way behind in fundraising and trailing in the polls, both nationally and key swing states. Nearly 60 million people have already voted and time is running out before Nov. 3, Election Day.

His campaign claims to be in a good position, citing an army of volunteers and the large crowds Trump has drawn even in the middle of a pandemic with surging coronavirus cases.

But you don’t need a top secret campaign memo to see where Trump is looking to shore up support. The president is saying it out loud at his now nearly nonstop rallies, with specific messages for seniors and suburban women now a regular part of his stump speeches.

“Do we have any seniors in the room?” Trump asked at a rally in Florida.

And then there’s this line, a version of which he has used at numerous stops: “Can I ask you to do me a favor? Suburban women, will you please like me?” he said at a recent rally in Pennsylvania.

Finally! Suburban women are flocking over to us. They realize that I am saving the Suburbs – the American Dream! I terminated the Regulation that would bring projects and crime to Suburbia. Not on my watch! Biden will bring the Regulation back, but bigger and worse.

Another way to gauge a campaign’s priorities is to look where it is spending time and money. Here’s a telling example: On Facebook, the Trump campaign has poured nearly $1 million into ads starting in late September, using a page called Women for Trump. That’s according to Bully Pulpit Interactive, an ad firm that tracks campaign spending on Facebook and Google and has worked with Democratic candidates.

“It seems they’re making a last-minute plea for women votes,” said Benjamin Clark, a founding partner at the firm. The ads are targeted to “Florida, Pennsylvania, Georgia and North Carolina. All kind of must-wins for the president.”

From ‘Saving Suburbs’ To Raising Hopes On Pandemic, Trump Makes His Closing Pitch

Trump is also spending time and money in Pennsylvania, Michigan, Wisconsin, Ohio and Georgia. That group includes both states he narrowly won in 2016, and others he won easily but is having to work harder for this time.

Meanwhile, the Biden campaign seems as if it is on the air everywhere in the final lap, running local ads in 19 states and spending millions during major sporting events, like the World Series. In contrast, Trump is only advertising in 11 states and is getting outspent in most of them, according to the tracking firm Ad Analytics.

.@JoeBiden has officially surpassed Michael Bloomberg as the highest spending candidate of 2019-2020 and all time.

“We very much like where we’re at,” Bill Stepien, Trump’s campaign manager, told reporters, making the best of a less-than-desirable situation. “We have more than sufficient air cover.”

The latest campaign finance reports show Biden with more than three times as much cash on hand as Trump. Biden had $162 million cash on hand in the period ending October 14. Trump’s campaign had just $43 million. The advantage shows in Biden’s TV ad buying totals. Ad Analytics pegs Biden as spending more than twice as much on advertising than Trump did last week.

Money Tracker: How Much Trump And Biden Have Raised In The 2020 Election

After Thursday’s debate, Stepien announced that Trump pulled in his strongest-ever small-dollar fundraising haul. But it’s not clear just how much he raised and how much it will help.

The Republican National Committee is also pitching in with ads in four swing states and Iowa. The ads are aimed at senior citizens, making dire predictions about a Biden presidency hurting Medicare.

Stepien argues television ads and fundraising dollars don’t tell the whole story of the race. “We’re actually running a real campaign,” said Stepien, who has knocked Biden’s small, socially distanced events. “You know, a campaign with voter contact. A campaign with events. We like our plan better.”

Stepien points to voter registration drives bringing more people into the Republican Party, and he has continued to argue that any losses in support from seniors or women could be made up with support from Latino and African American voters. It’s not clear that math works, but Trump’s campaign continues to project confidence.

Anxious Democrats Don’t Trust Biden’s Lead. His Campaign Is Fine With That

One of those volunteers is Adele Amico, who lives in Estero, Fla. She has been putting in about 40 hours a week for Trump at this point. On a recent afternoon, she took a reporter’s call while driving between working a shift watching polls and going to set up chairs for an Ivanka Trump event with members of her town’s Republican club.

“I just called a bunch of members and I said, ‘Look: we need to put up a thousand chairs. Can you come out and help?’ and they go, ‘Absolutely,’ ” Amico said.

She says volunteers in Florida are knocking on doors, making phone calls and reaching out to people who requested absentee ballots to make sure they send them in before the deadline. “It’s pretty intense,” she said.

Campaigns are always boasting about their volunteer armies, their get-out-the-vote efforts — and it’s always impossible to tell whether it’s really as good as they claim. It’s even harder to make comparisons now because of how the coronavirus has changed traditional campaign and voter activities.

But what is clear is that based on polling and where the candidates are trying to compete, Trump has a narrower path to victory. Or as the president said at a recent rally, he has to “run the table” under dramatically different circumstances than he did four years ago.