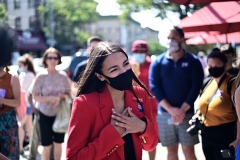 And if Democrats do win, she said she plans to push the Biden administration to the left, lobbying for the appointment of “progressive leaders” in a Biden Cabinet:

Jake Tapper, host of CNN’s “State of the Union,” told Ocasio-Cortez that Sen. Bernie Sanders (I-Vt.) reportedly is interested in serving as Labor Secretary if Biden wins the White House.

“It’s really about who the Biden administration is choosing to lead agencies across the board,” Ocasio-Cortez told Tapper.

“And I am not familiar personally with any of Senator Sanders’ requests or non-requests. I do not know personally about the veracity of this.

But this is about making sure how — how are we going to not just make up for lost time, but leap into the future and actually ensure that we are making the investments and policy decisions that will create an advanced American society?

And, frankly, conservative appointments will not get us there.

The congresswoman said it is her role to “push” the next Democratic administration:

“And my role is consistent, in making sure that we push the Democratic Party to have a larger vision for our future, to listen to the needs of the working class, of people who are living paycheck to paycheck, young people, people of color, because I believe that is the base of the Democratic Party, and that…is who we are, that it is our job to make sure that we are serving all people in the United States, and particularly our base.

Ocasio-Cortez said if Democrats hold the House and win both the Senate and the presidency, “then I believe we have an obligation to the American people to show what a Democratic administration can actually accomplish…and that we can govern, and that we can truly have leaps in policy that people can feel in their everyday lives that makes voting Democratic worth — not just worthwhile, but a memorable shift from just a flatline of this idea of bipartisanship, which often just becomes Republican manipulation.”

Because Ocasio-Cortez is so intent on Democrats taking control of government, she is willing to overlook her disagreement with Joe Biden on fossil fuels.

“I have a very strong position on fracking,” she said. In fact, the congresswoman introduced a bill to ban all fracking nationwide within five years.

“However, that is my view,” she said. Vice President Biden has made very clear that he does not agree with a fracking ban. And I consider that — you know, it will be a privilege to lobby him…should we win the White House.

“But we need to focus on winning the White House first. And I’m happy to make my case. But I also understand that he is in disagreement on that issue.”

Biden has endorsed a fracking ban, but on Saturday, he told voters in Pennsylvania, “I’m not banning fracking, period.”

“You know, it does not bother me,” Ocasio-Cortez said.

She said Biden as president is “a much better person…to be receptive and actually listen to the voices of advocates” than Donald Trump is.