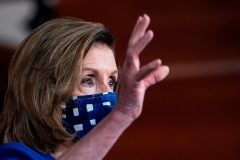 (CNSNews.com) – “If Democrats keep the House, are you going to run for another term as Speaker?” CNN’s Jake Tapper host of “State of the Union,” asked 80-year-old Rep. Nancy Pelosi (D-Calif.) on Sunday.

“Yes I am,” Pelosi told him. “But let me also say, we have to win the Senate.” She urged Americans to “vote your health.”

Pelosi will be 81 on March 26. She is among a handful of octogenarians currently serving in the House.

Pelosi became the first female speaker of the House in 2007, serving until 2011 when Republicans took control of the chamber.

In the 2018 midterms, Democrats won back the house, and Pelosi was elected to a second stint as Speaker, although not without opposition.

If Pelosi does get the opportunity to run again for speaker, she may not have the support of Rep. Alexandria Ocasio-Cortez (D-N.Y.), with whom she is often at odds.

Listen to AOC’s diplomatic response to Tapper’s question: “If Speaker Pelosi runs again, as she just indicated she will if the Democrats keep the House, will you support her?”

“Well, again, I want to make sure that we win the House. I do believe that we will,” the congresswoman said.

“But it’s critically important that we are — that we are supporting Democrats in tight swing races, making sure that not only all of them come back, but that we grow our majority.